From the Journal of HunnyDew | mood: Lovestruck

Mac Tonight and the state of commercials in the modern day

I'm going to start off by saying I am a huge Mac Tonight fan.

The absolute charm and coziness of the commercials are a thousand percent better compared to the saturated "laugh at our jokes that we know aren't funny but I hate my job and we can't do nothing else" we got now, right? And I get that Mac Tonight doesn't really grab anyone attention because there's not any loud noises or super saturated colors - but its NICE TO LOOK AT! Also they don't really shove the idea of Mcdonald's up ur a s s. They still do, because its a commercial, but not as much. Like Mac Tonight is seducing you. A lot of people really like the whole "night time 80s aesthetic", and with people obsessing with fast food mascots, I think Mac Tonight would be super cool. I know it'll never happen because of the Moon man incident, but its cool to dream about the next time I get to see Mac tonight on TV again :( 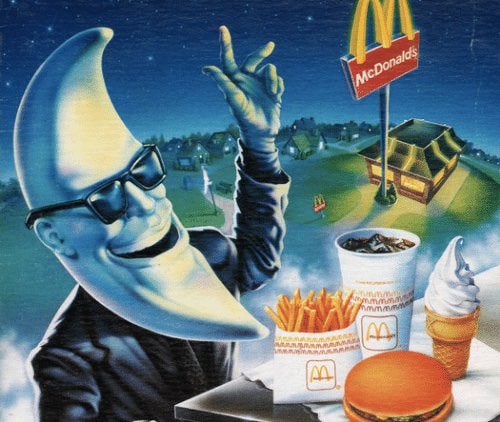